What do you get when the Archaeology Research Forum, the Viking Studies Research Group and the York Heritage Seminars (YOHRS) combine for a seminar…? 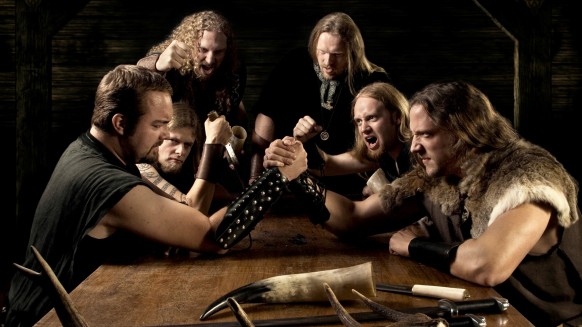 In 2012 and 2013, members of ‘Pagan’ metal bands Týr and Heidevolk visited the Kings Manor to give research seminars on their cultural influences. In 2012, for example, Heri and Kári, singer and drummer of folk metal heavyweights Týr, explained (and illustrated with samples), how their work was strongly influenced by Faroese chain dancing and other folk music, West Country heavy metal, and Norse legends. The discussion ranged far and wide, including the genetics of the Faroes, Scandinavian rivalries, religion, and vegetarians; vegetarians did not come out of this very well. Finally Heri entranced the audience with a solo rendition of a Faroese folk song. The seminar was recorded by YOHRS and is now available for download on www.varmintshow.net. For the second seminar by the band Heidevolk, see this Youtube clip.

These events are now documented and given context in a publication by Steve Ashby and John Schofield. Their paper, ‘Hold the Heathen HammerHigh: representation, re-enactment and the construction of ‘Pagan’ heritage’ is now online in the latest International Journal of Heritage Studies.