One invincible knight. One impossible quest 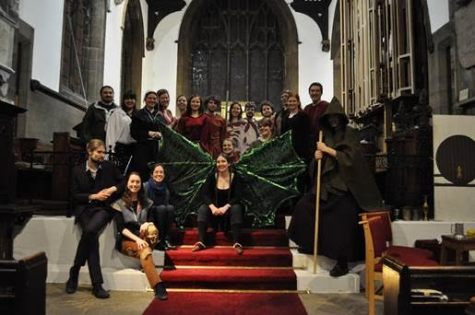 The Lords of Misrule present the story of Sir Sivrit of Spannungsbogen, a knight like no other. Worn out by the massive empire carved out by Sivrit’s victories, the Holy Roman Emperor discovers that having an unbeatable knight is perhaps not all it’s cracked up to be. When, in desperation, the Emperor sets Sivrit the impossible task of killing Death, Sivrit embarks on a journey that will take him from the circles of Hell to the highest spheres of heaven, leaving behind him a trail of destruction.

An original production by PhD candidate James Hillson, Sivrit draws on the Nibelungenlied, Dante’s Divine Comedy and The Three Living and Three Dead Kings in a vibrant and humorous reinvention of medieval tales of knighthood.

7.00pm on 13th, 14th and 15th August in the back courtyard of King’s Manor on Exhibition Square
Tickets: £7 full price and £5 concessions. Tickets can be bought at the door or reserved by emailing lordsofmisrule@gmail.com

[This article is reproduced from http://yumagazine.co.uk/fact-or-fict/]

Greg Jenner is a horrible historian. That is to say, he’s in charge of the historical content of BBC’s Horrible Histories. As Vice President of Pedantry – Greg’s preferred title – he ensures that the BAFTA-winning kid’s comedy is factually accurate. And he’s not that horrible. In fact, he’s a very nice historian. The reader is advised that this is indeed a fact, and no mere ‘fict’.

Greg uses the terms ‘fict’ and ‘fact ATM’ (“fact at the moment”) to sift through the weird and wacky stories he gathers for a series of Horrible Histories sketches to be written.

“As a historian,” he tells me, “I spend a lot of my time trying to tell people that we don’t know what the full story is, and then I start telling people these amazing ‘facts’. But there are some times when I stop and think, ‘is this even true?’”

A fict, according to Greg, is a falsehood that is widely believed to be true. His favourite is one apocryphal account of Cleopatra. “You can read on the internet that she used a box full of bees as a sex aid. That’s just total nonsense. The earliest reference comes from about 15 or 20 years ago. Everyone believes it so it’s become a fict.”

Away from the fact-finding ‘buzz’ of the library, Greg’s time is spent consulting onHorrible Histories scripts and song lyrics. He’s “basically a teenage boy” when it comes to his musical tastes.

“I’m into hard rock – you know, men with beards shouting. Sometimes I’ll try and sneak it in. We did a song about the Luddites, and we did them as a punk band. I was trying to explain who they were to the writers, and I think I made a joke about Rage Against the Machine, and from that we immediately put something together. It’s good fun to see a bit of heavy metal in a kids’ show.”

The show sees Julius Caesar reincarnated as a rapper and Admiral Nelson as a seafaring Sir Alex Ferguson. The decision the Horrible team made to depict these figures outside of their true chronology was one they thought hard about.

“It was a philosophical problem,” Greg says. “The hurdle we had to scramble over was the fact that history is not the same as the past.

“Caesar did not rap, but we’re creating a parallel universe that allows you to be playful with a comic conceit. What Caesar says has to be historically accurate, and that’s when I can start being pedantic.”

His job by nature leads to many a debate with fellow historians. Even as I dial him up for our phone interview, I interrupt his latest Twitter argument with historian friend Tom Holland.

The topic is Sainsbury’s infamous Christmas advert set in the First World War. Holland criticised the advert for its “commodification of history”, while Greg, like many people who aren’t historians, enjoyed it.

“Maybe I’m wrong,” he laughs. “All the other historians are disagreeing with me. I think part of the issue is that I work in TV as well. When I see something that’s well-made and beautifully shot it wins me over.”

You could call Greg a history outsider. Since his undergrad years at the University of York, he’s never been one for convention. He would hand in “stupid essays” to his tutors, which would land him in trouble. “After a while, though, I think my lecturers realised that I wasn’t being silly just for silly’s sake, and that I was looking at comedy with a genuinely critical eye.”

His proposal for a History MA on Monty Python was accepted, but being low on funds he scrapped his original plans for a PhD and left for television the following year.

“I see things in much more of a comic light than other historians do,” he tells me, fondly recounting a childhood education in South Park and The Simpsons.

But he takes due care not to paint his colleagues as fusty cloister-dwellers. “There’s been a key change in the culture of academic history.

“I think that ivory tower concept maybe did exist a few decades ago, but I meet a lot of historians in universities and archives, and they’re all fantastically good at public engagement.”

He sees something of a paradox in upholding the values of a historian while working in the media. History documentaries tend to “gloss over” any academic dialogue, which could be seen as at least limiting, and at most undemocratic.

“Obviously, historians debate among themselves, but that debate should be made more public. There should be a red button feature on programmes that lets you watch a discussion on the history of the period.”

“Some would disagree, but I think the job of the historian is to correct people’s thinking and tell them when they’re wrong.

“Let viewers enjoy Braveheart, but encourage them to read more about William Wallace afterwards. That’s why I’m on Twitter: I love talking to people and answering their questions on the past.”

As for the future, he has just released his first book, A Million Years in a Day – Greg’s history of “shitting, pissing, eating, farting, etiquette,” among other things. “The idea was to write a book that wasn’t intimidating, maybe for people who have been put off by history books before.”

For now, you might well find Greg on your TV screen, having been roped in for various Horrible Histories cameos. “I’m William the Conqueror’s dancing squire,” he sighs. “Unfortunately, I have a historical face.”

The inaugural issue, No 1 (2015): Histories of Medieval European Literatures: New Patterns of Representation and Explanation, can be found at: http://riviste.unimi.it/interfaces/index