On Monday 20 June 2016, we held our annual CMS Summer Party on the lawn at the King’s Manor. Blessed by a unprecedented splash of sunshine, we gathered for strawberries, prossecco and ice creams provided by Paul and his truck!

During the party, we were delighted to announce that Stephanie Montieth is this year’s winner of the £150 Garmonsway Prize for the best academic performance in the first half of the MA in Medieval Studies, as well as the Viking Poetry Essay prize.

We also had the sad task of saying goodbye to Andy and Dawson, two great friends of the CMS who are leaving as the university makes radical changes to the portering arrangements at the King’s Manor. We are very sorry to see them go.

And many thanks to Heidi Stoner for taking the photographs at the event!

Jennifer Caddick is a student on the MA in Medieval Studies and is currently writing a dissertation on Sermons and the Painted Chamber during the Opening of English Parliaments, 1399-1484. At the end of April, she was shown round the Palace of Westminster by Martyn Atkins, Senior Clerk at the House of Commons. Here she reflects on that visit.

For the past couple of years, I’ve enjoyed studying a few different aspects of late-medieval English parliaments. Despite this interest, I’d only ever accessed them through the parliament rolls and had never managed to visit the Palace of Westminster as it stands today. Until the end of April, that is. Martyn Atkins was kind enough to take time out of his day to show me around, and I was able to see and learn a great deal about the history of the Palace of Westminster, and hear some interesting stories about parliamentary proceedings today! While I was able to see a large amount of the Palace of Westminster (including the Lords and Commons chambers, and the committee rooms), the visit was incredibly useful in providing me with a better perspective on the site for my MA dissertation on opening sermons and the Painted Chamber between 1399 and 1484.

From Westminster Hall, we next walked to the Chapel of St Mary Undercroft, which is beautiful and definitely worth checking out! Admittedly, it was restored in the second-half of the 19th century, when there were attempts to recreate its medieval decorations in a neo-gothic style. Adjacent to the Chapel as well is a broom cupboard with a plaque inside dedicated to the Suffragette Emily Wilding Davison, who hid in there overnight during the 1911 census. 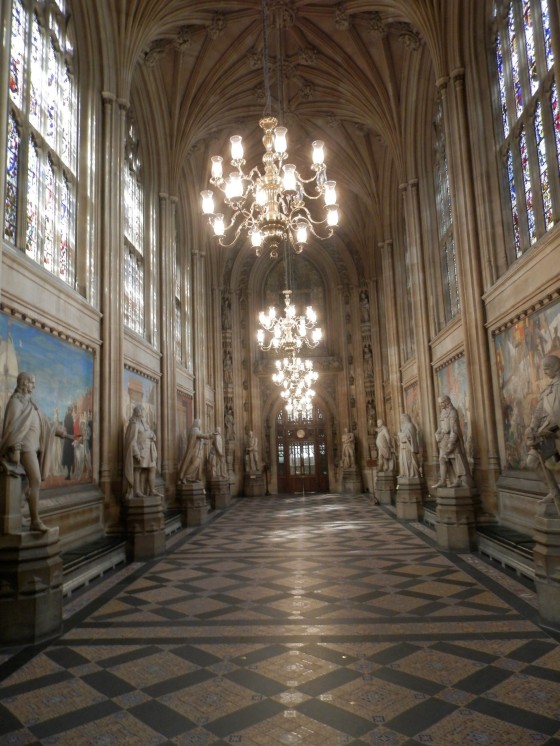 While Westminster Hall provided a brilliant sense of the architecture of the medieval palace, St Stephen’s Hall was useful in terms of getting a better idea of the dimensions of the Painted Chamber. The current St Stephen’s Hall was built upon the foundations of St Stephen’s Chapel, which was lost in the 1834 fire, but which during the medieval period was parallel to the Painted Chamber. Seeing St Stephen’s Hall, however, has made more real for me a problem I was encountering when considering the audience of the opening sermons. The rolls of parliament seem to suggest that everyone involved in parliamentary proceedings would gather before the King. Yet this doesn’t seem to be entirely plausible when considering the dimensions of the building.

When the Painted Chamber panels were uncovered in the early 19th century, copies were made by Stothard and Crocker, whose works were then used by Tristram to reproduce the images. These reproductions were tucked away together away from what I believe is the normal visitors’ groups (we’d definitely gotten away from the school groups at that point at least), and I may not have had the chance to see them otherwise. Although they are reproductions, it was again rather wonderful to be able to see the scale on which these images may have been produced, and the details that may have been implemented.

Unfortunately, I wasn’t allowed to take pictures at that point, but I was able to snap another picture on the terrace.

And then, one final picture – Martyn and I with Westminster Hall in the background (it had just started raining…). 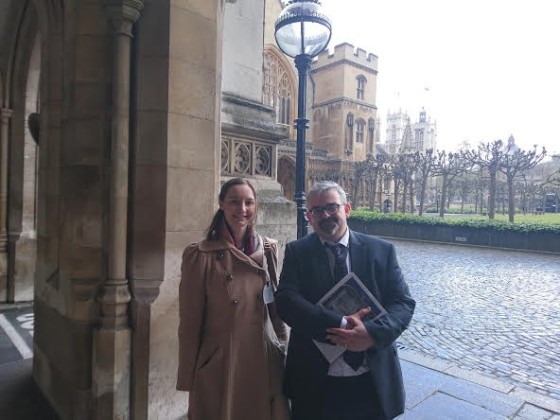 Thank you again to Martyn for his time and for the opportunity to visit the Palace of Westminster, and thanks also to Craig Taylor for contacting Martyn and making this visit possible.

Usha Vishnuvajjala presented the 2015 Fair Unknown Award to Jennifer Bartlett on behalf of the selection committee. The citation read:

“Jennifer Bartlett’s 2015 Kalamazoo paper, titled Arthur’s Dinner: Or, Robert Thornton Goes Shopping, reads the Alliterative Morte Darthur‘s early feast scene for what it can tell us about the material world depicted in the text and the material world of the scribe Robert Thornton. Bartlett demonstrates that the seemingly exotic foodstuffs at Arthur’s feast would have been quite available to Thornton in fifteenth-century York, and that familiar, quotidian objects like herbs and spices were regularly imported from so-called “exotic” locations.

The resulting article, published in Arthuriana, 26.1, argues convincingly for rethinking Thornton’s view of the “Oryent.” Just as Arthur imports foreign foodstuffs and domesticates them. Bartlett argues, he must draw on resources from outside Britain to sustain his seeming peerless status in the Alliterative Morte. Not only does the article re-orient the Alliterative Morte‘s relationship to the east, it also gives us a fascinating look at the details of the really weird food served at Arthur’s feast.

Jennifer received her PhD in Medieval Studies from the University of York in 2015.

In May the Viking Studies Research Group, sponsored by the Department of Archaeology and the Centre for Medieval Studies, welcomed to York, two of Europe’s leading archaeologists in the study of early-medieval coastal sites, Prof Dries Tys (Free University, Brussels) and Dr Sven Kalmring (Centre for Baltic and Scandinavian Archaeology, Schloss-Gottorf). Here they discuss the archaeology of coastal sites in Viking-Age continental Europe and Scandinavia:  https://www.youtube.com/watch?v=KXNnSBrgVDc