We had a fantastic selection of bakes, including a cake representation of The Divine Comedy, multiple illuminated manuscripts, and a delicious “50” cake to celebrate the upcoming 50th Anniversary of the Centre this summer.

But it wasn’t just baking on offer, as the event offered a chance to view (and vote on) the posters produced by our current MA students on topics from the core course module. A poster entitled “Pots, Pans, and Punishments” about Hrotsvitha’s Dulcitius took the prize, produced by CMS MA students: Daphne Slob, Isobel Staton, Max Botheras, and Claudia Rosillo. All the posters are now on display in the CMS building.

The CMS Christmas Bake-Off is also the chance to award the Garmonsway Dissertation prize for best MA Dissertation for the previous cohort, and this was awarded to Philippa Carter, for her dissertation on: Immaculate complexions: Skin, Sexuality and Gender in the Middle English Romances, which scored a whopping 95!

As the event wrapped up, Alana Bennett (CMS PhD) continued to serenade us with her hurdy-gurdy, adding to the medieval-themed festivities. 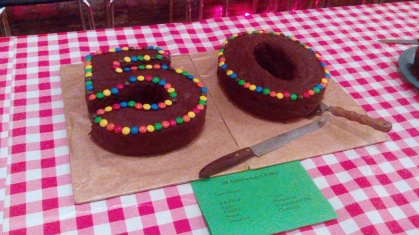 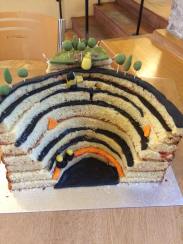 It was a pleasure to return to the King’s Manor last month to give a visiting lecture on my current research. I spoke about what I’ve been doing as part of my Leverhulme-funded project Pilgrim Libraries: Books and Reading on the Medieval Routes to Rome and Jerusalem. My paper in York, entitled ‘Medieval Pilgrims’ Books: Some Evidence, and Problems of Evidence’, was very much about research in progress, and I emphasised research as a process – involving experimentation, chance, unpredictable results, and sources that challenge one’s disciplinary training and methodological assumptions.

I presented five case-studies from my research, in a kind of backwards anti-pilgrimage: I started in nineteenth-century Cambridge and worked backwards to eleventh-century crusader Tyre. The pilgrims’ books I presented belonged to

All of these pilgrims and their reading are the subject of my ongoing research.

Norman Bennet’s 1880s pilgrimage started at Jaffa, and, as far as we know, followed a standard tour of sites mentioned in the bible. Like most English Christian pilgrims to the Holy Land, Bennet’s journey was concerned with travel to a sacred past, not an itinerary to the interesting places of his present. From the port of Jaffa, Bennett went to Jerusalem, and from Jerusalem he travelled east, into the Judean desert – we know that he visited the site of the Valley of Achor, mentioned in the Book of Joshua (Joshua vii.21-26); he visited Ein-Shemesh, the crusader-era monastery at Wadi Qelt, and the River Cherith (Carit), where the prophet Elijah was said to have been fed by ravens; the Spring of Elisha at Ain Sultan, where Elisha purified the spring with salt, as described in 2 Kings ii:19-22; he visited the Mount of Temptation and the Orthodox monastery at Quarantine, al-Quarantul, near Jericho; he visited Jericho itself; and he seems to have visited Ein Gedi on the Dead Sea.

Bennet’s pilgrimage is relevant to my research because we only know about it thanks to the guide book he took with him, which includes his annotations. This book, which is now held in the British Library in London, was Alexander Howard’s Guide to Jerusalem, a travel-guide for the English-speaking pilgrim, which was printed in London in 1888.

Bennet carried his copy of Howard’s Guide with him, and annotated it, slightly messily, in pencil. His annotations are really fascinating and help us reconstruct the experience of pilgrimage for a nineteenth-century Englishman in Ottoman Palestine.

Bennet commented on worldly concerns – a Pole with an ‘evil countenance’ in Jerusalem, pink lemonade, hot plum pudding that he ate in Jericho – but his jottings also show how the landscape moved him.

The glorious blue of the Dead Sea reflected in a blue mist on the mountains of Benjamin. The mountains of Moab rose solemn & grand with their deep blue sides towering to the white fleece clouds which floated above while to crown all the beautiful azure the sky formed what might be correctly called a background unparalleled in the silence of a heavenly beauty.

Bennet’s book thus has much in common with medieval pilgrims’ annotations in their books, revealing a somewhat personal and intimate script, albeit one that is still highly scripted and mediated, within the framework of pilgrimage.

Pilgrims’ books allow us to glimpse the individual pilgrim within the long history of pilgrimage. Bibliographic work on pilgrims’ reading and writing allows us to situate pilgrims in place and time; we can retrieve the traveller within the history of travel, put pilgrimage into its intellectual and cultural contexts, and also show the constant surprises and variety of pilgrim experiences.